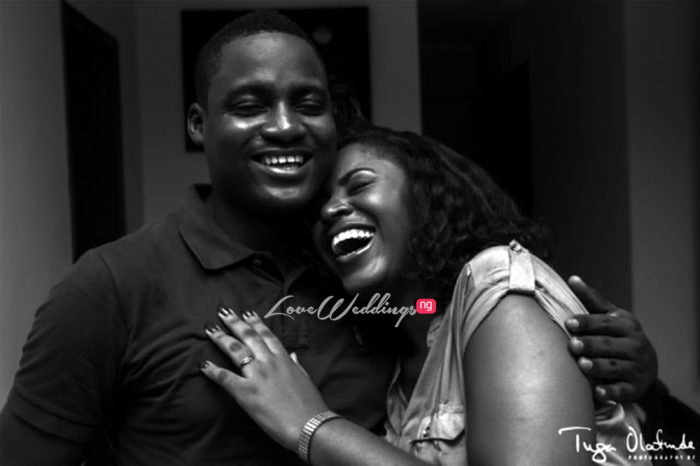 I am mega excited to share this story with you. I came across Tammy and Ochuke’s pre-wedding pictures on Instagram and I went hunting… Finally, started exchanging mails with the bride to be Tammy. Tammy and Ochuke have been super Loveweddingsng fans since we got talking (all the Instagram likes have not gone unnoticed) and I’m extremely grateful for couples like them who have become family.

May 31 2011. I had decided to open an account with this bank ages ago but I’d been stalling. That day, my sis and I finally got around to it. We walked into the banking hall and were directed to the marketing unit to meet a particular guy. Well his name was confusing at first…lol…luckily for us or rather as God had planned it, his desk was the first we got to. He was on phone when we met him but asked us to sit when we told him our intentions.

Truth be told I didn’t like him at first (for reasons best known to me….#wink), but I noticed he was a little handsome, though when my sis mentioned it in a suggestive manner, I told her he was not my type. After series of forms and a bit of chitchatting, we opened our accounts and left the bank.

And then…..the call came. Was gisting with my sis and my phone rang. I picked and what I heard was this “Hello my name is Ochuke, and this is not a bank-related call”. I didn’t know when I repeated his name (I mean, who wouldn’t remember it?) and burst out laughing because my sis was teasing me. So he asked me out on a movie date and I declined (Before nko?)

A few months later we moved things up a notch. He was a wonderful person to talk to. We could gist for years, tease each other, play, dance, cook, and all what not etc. I fell hard sha….I wee not lie. Twas fun but the greatest part of it was how much we were willing to learn from each other and how we were concerned about our personal and spiritual growth. We were pretty much into each other. I remember how he used to confess to not being romantic yet he was really good at surprises.

And oh my…..the little things. He’s so good at those.

May 31st, 2011 – It was like every other day with the normal day’s activities going on as usual.

There I was at my desk at work trying to earn my daily bread. At this point let me state that I work in a bank and my unit is supposed to deal with just company accounts. At some point before noon, two ladies walk in requesting that they want to open an account. On a normal day, I’d just pass them on to the next table that does retail banking. Then it happened.

One of them ‘smiled’ and I had a rethink, told them to have a seat and that I’d be with them shortly. Long story cut short, the account opening form was completed & I rendered excellent customer service as a professional that I am. NOTE: There was no exchange of numbers (Beht as a sharp guy that I am #coughs… Lol) Now this was where there was a struggle in my mind… TO CALL or NOT TO CALL…. 2 or 3 days later I finally called.”

Suffice it to say the 1st call went well, invitation to hang out was turned down, a few more text messages and calls after, a ‘friendship’ started (I already knew I had found my life partner). Well a little later, on January 1st 2012, a relationship started.

This relationship was a long distance one for MOST part… I was in PH, she was serving in Onitsha and then after service, she got a job in Lagos. It wasn’t an easy one to pull off but thanks to calls, bbm, whatsapp, love and most importantly God who saw us through. There were also the unwelcome advisers who always had an idea of how long distance relationships worked though they had never been in one. *smh

She met my sisters and my family and they all loved her and I remember my sisters warning me that the day they ask after her and I stutter, they would have my head… Lol. They also said she can’t even run cos they will go after her n ensure she comes back.

The proposal was one that wasn’t really planned. It was Dec 28th, I was in Lagos for an official trip, Tammy was in Port Harcourt for the Christmas break. Somehow I got talking with my very good friend on how I was planning to storm Lagos in February and do a grand proposal and all and then she was like “why wait till then”? Why not get the ring and get it over with already?

That’s how I found myself in a ring shop, made calls to a few friends and all was set. Chosen date was Jan 1st 2013, a year after we started dating, Venue was in church (after crossover service). I had made a cake saying Please marry me…(Didn’t want to go with ‘Will u marry me?’ so there’s no option of a NO… Lol).

At this point I must say I’m not sure I heard half of what was preached in church that day. My mind kept thinking & rumbling & wondering what if she says no? In church in the presence of everyone… At that point, I almost called off the whole plan but somehow I let it go on…

Service closed, we got to the car park, she opened the car door to get in, saw the cake, went into shy mode and all the moods that come with such things… As a sharp guy, I was already on my knees in front of her… I know I said some things which I am most certain didn’t make any sense at the time cos we already had an audience and I just wanted it to be over with already. And so she said YES!

On the way home, I remembered we had a convo a few days before on how long engagements should last and she was of the opinion that it should be 6 months at most. So I asked “I guess we’re getting married in June?” And I remember the answer I got was HOW??? That she was too confused cos now that it has happened it felt different. I had a good laugh though…

The day before, I had stopped by his office for a little chat. Well, maybe I just wanted to see his face. While we talked, he reminded me that we were to go for crossover service and I should endeavor to be early. I agreed, I think. Twas to be our anniversary too so I didn’t suspect a thing. Unknowingly he had plans. We went to church together and now I remember I noticed some uneasiness but I could not have related it to anything. He kept going to get water and stuff and I felt he was just being sweet.

After service we walked to the parking lot with quite a number of friends we saw in church. Didn’t know they were in on the whole thing. He asked me to open the door and get in. The lot was still filled with cars so I hesitated and 0chuke insisted. I opened the door and saw the cake with “Please marry me” boldly written on it. I was so shocked that I started laughing hysterically.

Ochuke got down on his knees and held out the box with the ring in it. Twas the perfect moment: Fireworks in the background, camera lights flashing, my best friend on his knees in front of me. He said something about me making him happy and plenty other sweeeeeeeeet things. Well, I said yes.

I had a lot of time to plan my wedding, with all the date changes and all, and I really had fun. Boy, there were tough times, but in all, we’re coming out of them better than we were before. Remember what the Bible says about pure gold?

After the engagement, came the real challenges and quite a number of date changes (#whew)…. God had His plans and on June 7th 2014, we’re going to say ‘I do’ and commit to each other for life… The planning experience has been a time of mixed feelings (excited, happy, sad, angry, anxious, irritated, shocked). We had reaaaaaaaaalllly trying times but I guess that’s the true test of love. Our love and commitment to one another has kept us through this time and I am grateful to God for this.

One advice to everyone planning to get married, make sure you are marrying YOUR CHOICE & YOUR LOVE & as regards the ceremonies, decide on the type of ceremony you want and start planning early! Get your vendors early, look around, ask questions, talk to a lot of peeps and decide on time.

Once you are sure that this is the person, never ever let anyone make you feel otherwise. Love like never before, pray much more. Have as much fun as possible. Remember that at the end of it all, what matters is that you are married to the love of your life.

The couple will be saying their ‘I Do’s’ on the 7th of June, 2014 and we’re counting down to the wedding and can’t wait to share the wedding pictures.