Adam Harris was initially amused when his wedding pictures went viral. But then the meme turned dark. He wrote about his experience for BBC Trending. We found the article really thought provoking and thought to share. Read his article below;

Weddings are a whirlwind.

Here it is, this day that you plan for over a year and just like that – it’s gone. All you have are hazy memories of short moments and pictures. If you have a great photographer like my wife Tisa and I did, you can relive those moments over and over again.

Our wedding day was no different from many others. We agreed not to see each other until the ceremony. The only communication we had with each other were notes and gifts that the wedding party helped exchange for us. The day was building to the reveal. When my bride Tisa walked down the aisle, I tried and failed to hold back the tears. She was radiant. I was so happy to be marrying her.

In November, our photographer sent us the photos while we were on the honeymoon. We shared a few of them with our family and friends, laughing at some parts of the wedding that we missed or were too wrapped up in to remember.

There was a series of images in particular that stood out to us. They told the story of when we first saw each other that day, how she captivated the entire crowd as she came through the doors and began to walk down the stairs. The pictures showed me beginning to cry, fighting back the tears, and ultimately wiping them away. We loved this photoset and ultimately I posted it to my Tumblr. 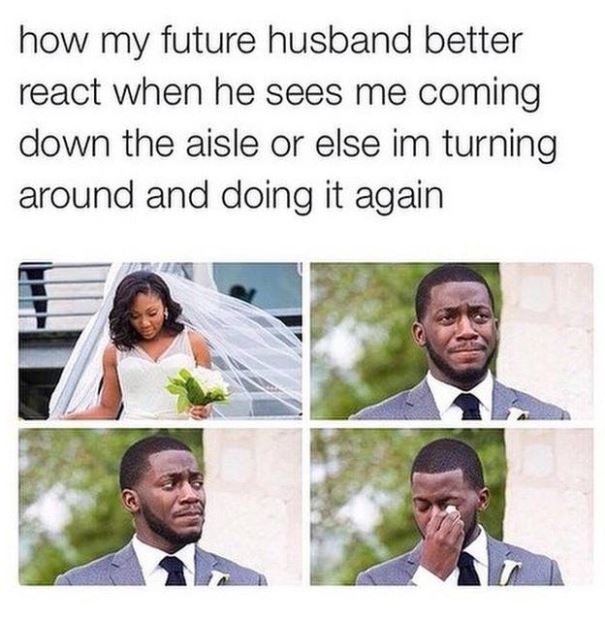 Within a month I noticed an unusual surge in notes on the Tumblr post. It quickly reached 7,000 notes in the span of two days. We didn’t think much of it. After all, it was just Tumblr.

Then our friends began to send us pictures of ourselves. They were the same pictures I shared on Tumblr, but now some had quotes and watermarks. Some had been shared and filtered so many times the genuine colour was non-existent. Of the photos that I posted, 3 or 4 were seen most frequently. The ones of our favourite moment.

Some of the captions on the photos were inspirational – people holding us up as an example of what real love looked like. Others played it off for laughs, comparing my tears to that of a college student forced to eat bad cafeteria food. 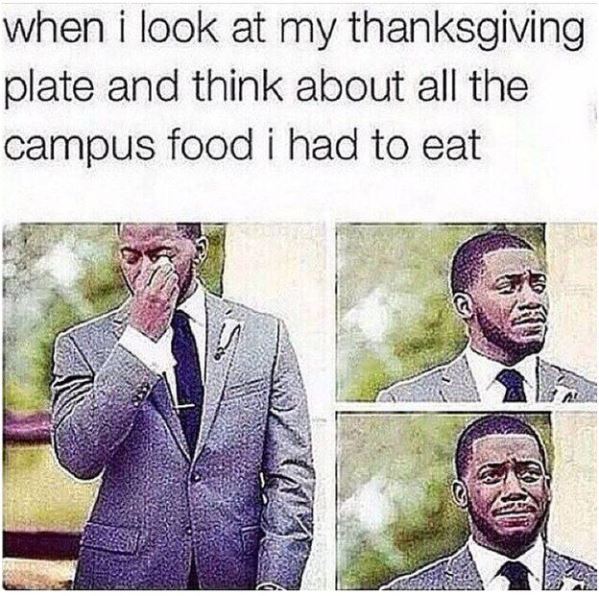 Tisa and I had become a viral meme.

Imagining that our meme fame would blow over in short time we brushed it off. As the months went along though, the images continued to be posted. Friends of ours continued to share them with us. The next thing we knew, it was the end of May and our photos had been circulating the internet for six months.

To date, we have seen several iterations of the meme. The good, the bad, the ugly. We’re strong people, and we know that words are just words. However, we abide by the general rule: “Don’t read the comments”. As much as we tried to stay away from the memes they kept coming back around – then trolls got hold of them.

Suddenly the comments weren’t jokes about Thanksgiving dinner, they were words that played off of racist stereotypes about black men. 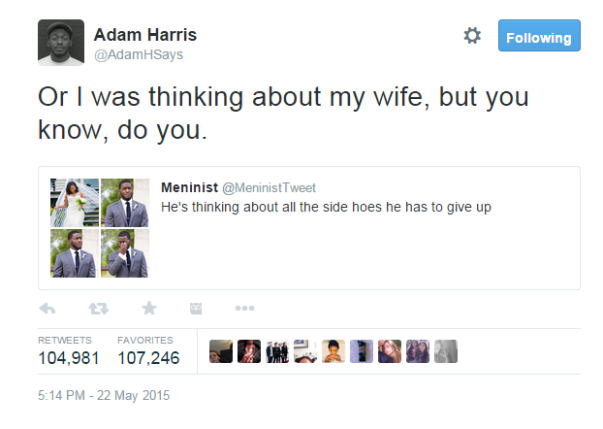 One tweet in particular implied that my tears weren’t about love for my wife, but because I’d have to give up a promiscuous lifestyle.

I didn’t find it funny.

As if my wife wasn’t enough to elicit that reaction. By including her photo in the set, they not only took a dig at my character but they devalue my wife, the brilliant, beautiful woman I will spend my life with. For the sake of a few retweets and favourites, they tried to distort the strength of our love.

People love memes. They can make you laugh, think deeply, and sometime they can utterly disgust you. However, its easy to forget that some of those pictures are of real people in real moments.

That’s what makes being a meme so strange. Memes take your moments and distort them. In doing so, they distort you.

People know your moment but they don’t know you. The real you. 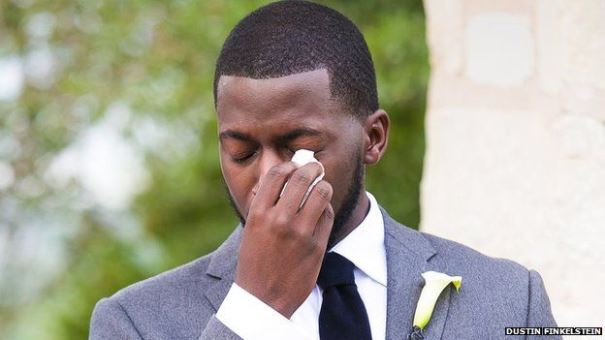 So here I am: Adam. 23 years old. Twenty-four in a couple of weeks. I’m married. She’s awesome. How I Met Your Mother is still my favourite show. Tisa and I bonded over it. I love to laugh. I’m a writer. I’m a basketball coach. I love politics and social media – the good and bad. I cry sometimes. Everybody does.

I am an internet meme.

But that’s far from the most interesting thing about me.