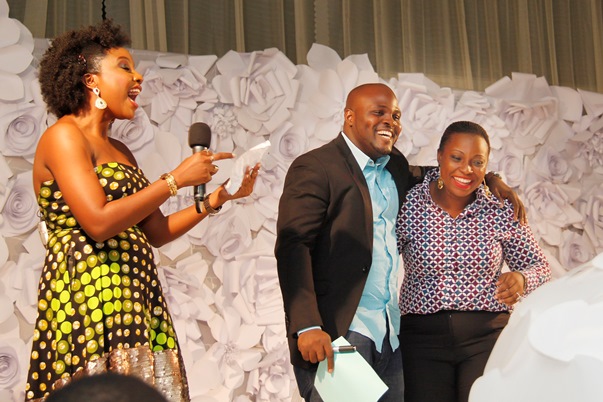 For these two lucky couples (Noye & Emmanuel and Blessing & George), the journey to their dream weddings has just begun!!

My Big Nigerian Wedding Season 2 is here again and this time, it’s bigger and better. Two lucky couples – one in Lagos and one in Abuja – will be having their dream weddings sponsored by only the best wedding vendors who make up the Dream Team in August and September 2015.

These couples emerged winners after a keenly contested competition with hundreds of other couples. After pulling enough votes to reach the grand finale in their respective cities, they participated in a live game show where they emerged winners.

Noye & Emmanuel in Lagos and Blessing & George in Abuja will be having their dream weddings in only a matter of weeks!

Noye is a Medical Doctor while Emmanuel is an Engineer. They’ve been childhood friends for a long time after meeting in 1996 in Church. Here’s what Noye had to say about their relationship:

We were on and off in the relationship due to distance and eventually entered into relationships with different people. But I guess God had his plan perfectly carved out for us without us knowing and in the appointed time, he made us determined to make it work by us becoming serious about it in December 2013 and here we are today.

About their expectations from the competition before winning, Noye said:

Our expectations from the competition was for the game to be free and fair without bias of any sort knowing the Nigeria we live in.

Blessing and George met in May 2012 via BBM through a mut‎ual friend. It turned out that George was Blessing’s sister’s course mate at University. They entered into the competition with high expectations. “We believed that we could win it when we made it to number 1 in the first stage,” Blessing said.

Luckily for them, they made it to the Grand Finale at WED Expo Abuja earlier this year where they emerged winners of the competition.

“Yes, I believed we would win,” George said. “In fact, she encouraged me in the beginning because she already envisioned the ‎wedding and honeymoon at Burj Al Arab. I had to encourage her at the end.”

When they were announced winners… “ I was not sure! I was shocked and happy! In fact, I could not stop the tears that found a way to spill over from my eyes. I felt bawling and rolling on the floor!” a very excited Blessing said.

Watch out for their prewedding photos, Dream Team announcement and of course, the wedding photos coming soon!

One thought on “My Big Nigerian Wedding Season 2: Meet the two Lucky Couples”