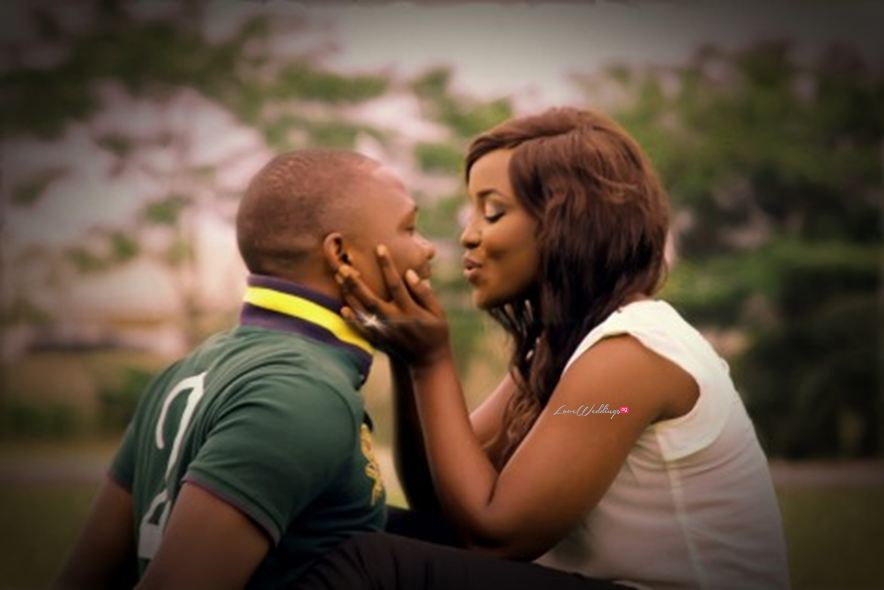 Freda & Cameo look so in love, it’s almost contagious. In their words;

Lets take a journey through “who we are”, ‘how we met’ to ‘the proposal’ and beyond. See through our eyes how much we love each other and how we were created to be together.


I met Cameo for the first time at my faculty’s year 1 welcome party. He was our faculty president. During the course of the party, I was selected to participate in the dance competition of which I won. That was how I got his attention. From then on I was made to attend most faculty excursions and events.

One day, after we got back from one of the excursions, I told two of my friends that I had a ‘huge crush ‘ on Cameo. My friends advised me to drop it because at the time, Cameo was in a serious relationship – infact, he was married….hehehehe. On hearing that, I folded my feelings like a blanket and tucked it safely away, but as they say …true feelings never die. I secretly hoped that one day I would go on a date with him. He was my friend on Facebook for years but each time I wanted to chat him up, I would restrain myself because I didn’t want to be disappointed.

Sometime later, during my fourth year in school, I got a Facebook message from Cameo saying he wanted us to meet. With joy in my heart, I gladly met him and from then on, we started getting to know more about each other. Well, you know how the story goes, the guy makes the move, the lady does some shakara, first date, second date and the deal is set.

Somehow, the one I loved in secret came back for me as my knight in shining armour.

I woke up that morning to a usual day – or so I thought. I never knew that it would be one day I’ll never forget in a hurry. I started out to clean the house but then I got a call from my girlfriends (Asi and Usi) saying they wanted us to hangout. I gave them the excuse that I had tons of work to do that day besides I had to see Cameo later that day. I tried to finish up the work in the house so I could go hangout with them.

As I was about leaving, Cameo called and asked that I take with me an extra dress as we would be having dinner with some of his colleagues later in the day. I got the change of clothes and make-up.

About an hour later I was with my friends, we went swimming, we gossiped, we had all kinds of chats, we even had extra company yet I didn’t suspect anything. We decided to go hangout in a restaurant in GRA after swimming but I was concerned about the restaurant we were about to go to because I knew that Baraka was a little bit expensive as per we were all corpers or recent graduates. I shrugged it off because I had some cash with me ‘what the heck, I can just get chapman’ hahahaha I suspected nothing.

We got to Baraka and the waiter set up two tables, we ordered and started taking pictures. While waiting for our drinks, Cameo called saying that he was coming to pick me up for the proposed dinner, I told him that he would have to wait for us to eat as we had already ordered. He got to the restaurant with 4 of his friends and they all joined the table. I didn’t suspect nada.

One of his friends even asked me if i thought that it was an arranged gathering, i said no.- at that point I should have suspected something, but I didn’t. I even cracked jokes at the table in a bid to keep the place lively.

One of his colleague at the office, Obinna decided to make everyone introduce themselves, I was the last one to introduce myself and while I was making my speech, Obinna asked me to stop and turn around…………. I noticed the atmosphere had changed and Bruno Mars’ ‘Marry you’ was playing in the background.

I turned and found Cameo on his knees with the ring……

I was so overwhelmed that I ran into the restaurants convenience and sat on the floor…..

I was dragged back out and he was still kneeling *blushing*……..

He didn’t need to ask me if I wanted to marry him, I was already saying YES YES YES

Paparazzi, shouts, stares, motions, I was in that very moment humbled beyond words.

Thank you my sugar for that priceless moments.

Hmmmm….. I love a lot of things about him.
I love his smile… it gives me butterflies.
I love the way he cares for me, its like he sees me like a flower and he helps me bloom everyday.
I love the way he encourages me and pushes me to be better, You can’t stay around him and be the same.
He is family oriented, he treats my family like his.
He is selfless to the last.
He is very humble and honest.
He is very down to earth and playful.
He knows me more than I usually give him credit for…hahaha
He loves God
He is very hardworking and industrious.
He is very dependable, he is my knight in shinning armour.
When he is around, everything falls into place.
He makes me laugh sooo hard that I can’t stay mad at him for long.
He is a giver, a true lover, a true friend

Freda is unique in her class and I bless the womb that gave birth to her and the road that made our path cross. she is the most amazing woman on planet earth. A true lover and a diligent woman, she is a perfect definition of the proverbs 31 woman. A true believer of God’s word, when she leads praise in church, i feel the heavenly.

Her care, love and creativity makes me marvel at this wonderful hand made of God. God must have had me in mind when she was created as everything about her met my desire. She is an embodiment of true beauty and good character which radiates around her. A friend and a confidant, Freda is a great cook and a home maker. She relates well with everyone especially my family and my friends. Every moment spent with her is truely magical.

I couldn’t have asked for more. Thanks baby for being that special lady in my life.


We love weddings, do you? Get in touch today