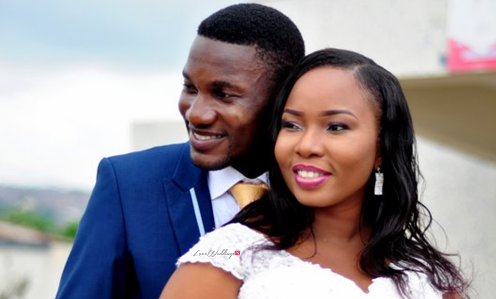 We posted pictures from their pre-wedding shoot by Photosuite recently. The couple had their traditional wedding on July 25, 2014 and their white wedding on July 26, 2014 in Abeokuta. Read their story below;

Once upon a time, there lived a boy named Paul and a girl named Nike…and they lived happily together after. Screeeech! Rewind!


There lived a boy named Paul and a girl named Nike. One day, after Nike’s family were done with dinner and Nike had gone to bed, her sister pleaded with her to make another bowl of ‘Eba’ for a guest who was soon to be home. Grudgingly, she obliged, then went back to bed and never saw the guest.


Fast forward: It was a lovely day in Eleko beach, the fun seekers from Nike’s local church were chatting happily and suddenly, Paul said he and Nike had a song for everyone. Of course this came as a surprise to Nike who detested being the centre of attraction of anything. Anyway, what happened that day was far from singing and dancing, it was the beginning of a happily ever after. Yes, Paul asked Nike’s hand in marriage. She couldn’t decide between saying yes and giving him a hard blow for making it a public affair.

We wish Nike & Paul a blissful married life. See pictures from their wedding below;