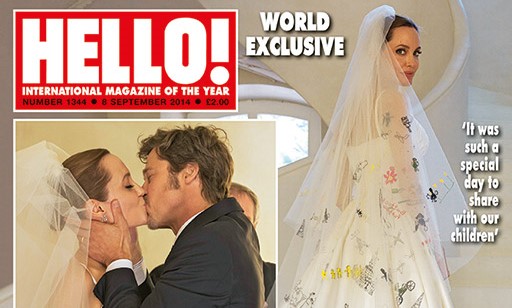 Angelina Jolie and Brad Pitt surprised the world with the announcement of their wedding, which took place on the 23rd of August 2014 at the couple’s private estate just outside Marseille. Finally, we get to see pictures from their surprise wedding.

The notoriously private couple made the unexpected decision to release pictures of the wedding to several magazines including People and Hello.

“Luigi is like family to me and I couldn’t imagine anyone else making this dress. He knows and cares for the children and it was great fun putting it together.”

Each child had a key role to play: Eldest sons Maddox, 13, and Pax, 10, walked their mom down the aisle; flower girls Zahara, 9, and Vivienne, 6, tossed petals gathered from the garden; and Shiloh, 8, and Knox, 6, served as ring bearers. The kids also helped write their parents’ vows. And Pax baked the cake! Luigi Massi, the master tailor at Atelier Versace, sewed dozens of designs from her children’s drawings into the dress and veil.

As the incredibly natural photos show, the pair chose to marry in a ceremony on 23 August that was as simple as it was intimate. There’s the first look at Angelina in her breathtaking wedding gown by Luigi Massi of Atelier Versace, the veil covered with artwork by her and Brad’s children – Maddox, 13, Pax, ten, Zahara, nine, Shiloh, eight, and six-year-old twins Vivienne and Knox.

“It was important to us that the day was relaxed and full of laughter. It was such a special day to share with our children and a very happy time for our family,”

The bride – Angelina walked down the aisle in a dress designed by one of her favorite designers – Atelier Versace and her children. Her dress – a classic ivory gown featured a ruched bodice, thin shoulder straps and a full skirt. The veil was covered in drawings by the kids, which were embroidered on by Versace with the help of the design houses’ master tailor – Luigi Massi.

The Cake and the Relaxed Reception

The Children Wrote the Vows and Chose Their Own Clothes

The couple told People that they exchanged a few words written by their children. Jolie said;

“The children wrote vows and asked us to make promises to each other. It was very sweet what they came up with,”

The kids also wore items like top hats and other festive attire that they picked out themselves.

Instead of hiring a full-on band or having music playing when Jolie walked down the aisle, 20 guests and Pitt himself hummed “Here Comes the Bride” when the actress walked to be with her husband. Jolie said; “There was no music, so family and friends hummed,”

Jolie’s Dedication to Her Late Mother

Jolie lost her mother Marcheline Bertrand to ovarian cancer in 2007, so to honor her, the bride wore “a little flower ring that was hers,” she said. And her brother James “wore an angel pin from her jewelry box.”

Pitt also engraved a dedication to Bertrand in the chapel where they were wed.

The 20 people in attendance included the kids, Pitt’s parents – Bill and Jane, his siblings Doug and Julie, and Jolie’s brother James.