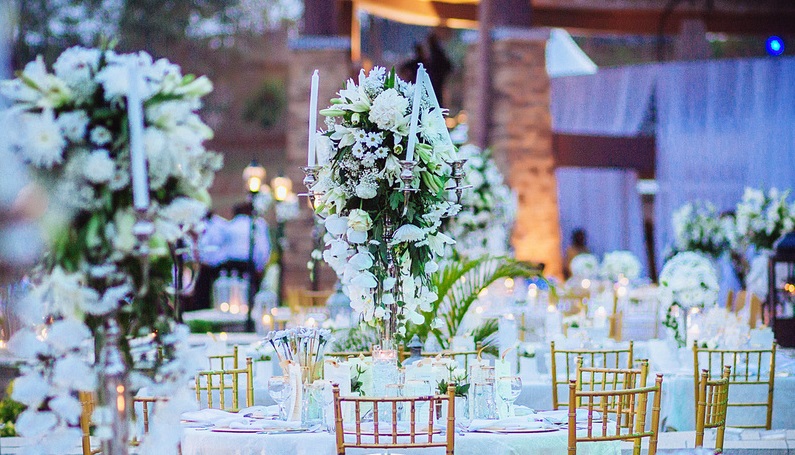 I read an article titled ‘How Nigeria’s Elites Spend Over $2 Million on their Weddings’ on Forbes‘ website today and thought it was very interesting. Just in case you missed it, read the article below;

Illusionists flown in from Spain, flowers imported from France, or an R&B superstar flown in from the United States. No request seems to be out of line to Nigeria’s rich when it comes to the most beautiful day of their life. And don’t even mention the b-word – budget, that is – ’cause whatever the bride wants, the bride gets.

Due to its oil reserves, gas, telecom and rising entertainment industry, Nigeria may consider itself Africa’s largest economy as of early 2014. But natural resources and Nollywood aside, there’s another million dollar business out there giving the national GPD a major boost: the wedding events business.

The West African nation may be home to the majority of Africa’s billionaires, but there’s no shortage of millionaires either. “Our core clientèle is mainly made up of millionaires. They will not hesitate to spend the money in order to get what they want. If they need to fly in an artist from America, or a decorator from Dubai or London, they will do so,” says Funke Bucknor, founder of Nigeria’s leading wedding and events company, Zapphaire events.

Bucknor is a brand. Apart from her wedding planning duties, she’s published a book titled The Essential Bridal Hand Book, and in the first quarter of 2015 her very own TV show will start airing on a national TV network. She founded her wedding planning business twelve years ago and was amongst the first to do so. Today, her profession which seemed unnecessary to many locals over a decade ago, has become an essential to the moneyed Nigerian bride that wants her wedding to be the talk of town. Or perhaps it is better to say her weddings. ‘Cause one wedding alone just doesn’t cut it. First there is the traditional wedding – the only wedding recognized by the family – followed by the white wedding, which is similar to that which we know in the West. As for the latter, the destination wedding is all the rage. “Dubai and London are the most popular destinations, followed by Cape Town, Seychelles and the Maldives. Florence is currently growing in popularity,” Bucknor adds.

In 2013 research company Euromint showed how Nigeria had world’s fastest growing rate of champagne consumption, second only to France, while ahead of other lucrative markets including the US and China. Lagos-based beauty-queen-turned-event-planner, Elohor Aisien, concurs. “Nigerians love champagne, so the most money will be spent on drinks as well as food. On Nigerian weddings there’s food from 2pm till midnight.” Given that the average Nigerian wedding will easily have around 1000 guests, whereas the bigger wedding will have between 2000 and 3000 guests, the choice of champagne is a crucial one. “Old money Nigerians may keep things more subtle, new money Nigerians are more concerned with letting people know that they’ve arrived. Magnums of Dom Pérignon will often be their drink of choice. In a way it’s become this competition amongst brides. They’ll ask me: ‘How many bottles did she have? I need more,’” 33-year-old Aisien says.

Her wedding and events planning company Privé Luxury – founded in 2012 – may be a newbie on the scene, but Elohor can already consider offspring of Nigerian royalty, and the country’s leading female recording artist amongst her clients. “I’ve done the wedding of Reukayat Indimi, who comes from a royal Nigerian family that hails from the north of the country. According to the northern tradition, the bride can’t leave the house during the month leading up to the wedding. Since the bride didn’t have her wedding dress yet, I flew into London with a model who fitted several dresses for her. Elie Saab is a popular choice of wedding dress amongst Nigerians, whereas most grooms I work with want a Tom Ford total look. Vera Wang is also very much in demand, since it fits well on the Nigerian body type,” Elohor says, who may also tick the box that says “celebrity wedding”. In 2013 Privé Luxury planned one of Nigeria’s most talked-about weddings, which ended up being broadcast on a local TV network. It was when Nigeria’s leading female recording artist Tiwa Savage, exchanged vows with husband Tee Billz. Their destination wedding was held at Dubai’s Armani Hotel, part of world’s tallest man-made structure, the Burj Khalifa.”I have a good relationship with the Armani Hotel in Dubai – they love Nigerian weddings,”Aisien concludes.

Some might argue that it is morally wrong for a country in which some have to live on a dollar a day, to add value to how many liters of DP are flowing at a wedding. Others however, claim that if it weren’t for lavish Nigerian weddings, there would be no Nigerian economy. “I appreciate them spending this money, cause without these weddings I don’t know where the Nigerian economy would be,” says Weruche Majekodunmi, founder of Newton & David, a local company specialized in event design and décor. “The weddings keep our economy going. Normally the rich Nigerians will spend their money abroad, whenever they go shopping. Thanks to the wedding industry the money is being invested back into our economy. Jobs of caterers, tailors, carpenters and upholsterers are being sustained. Prior to these major weddings, the profession of make-up artist wasn’t even considered a full-time job,” she explains.

Weruche started working with flowers at church as a hobby, around twenty-five years ago. It was at a time in which Nigerians paid little to no attention, to the decoration of their wedding venue. “Up to fifteen years ago, some weddings wouldn’t even have a table cloth on the tables and they wouldn’t have any flowers except for the bridal bouquet. Nowadays Nigerian weddings will feature expensive flowers from France, silk table cloth and lots of crystal. A lot of the elite Nigerian kids have been educated abroad, so they’re used to the international standard when it comes to detail. They’ve become accustomed to a certain standard, so to import something isn’t unusual to them” the décor specialist slash wedding planner explains. Currently trending amongst the international kids is the flower wall, which surged in popularity after Kim Kardashian’s marriage to Kanye West.

Weruche goes on saying, “It has happened three times in the last five years that I’ve organized a wedding that cost over $2 million. They spent the most on food, Cristal champagne, entertainment and gifts to their guests. At one wedding all the invitees got their wedding outfit with their invitation. At another wedding they handed out microwave ovens, smart phones and rice cookers, to all of their guests. At some other weddings they’ll fly in their guests and arrange their accommodation in case they decide to get married overseas. You must understand, that our reasoning is different from that in the West.”