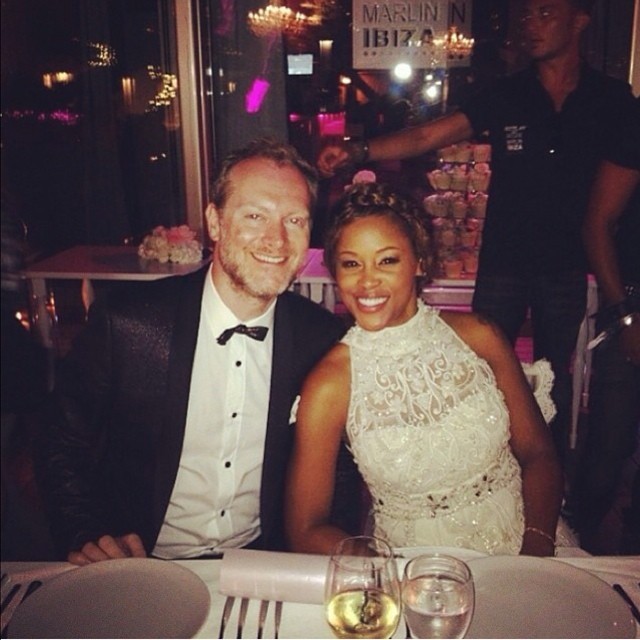 Rapper Eve has tied the knot with Gumball 3000 founder Maximillion Cooper, according to the couple’s DJ pal Steve Aoki. The newlyweds said “I do” on the beach at approximately 8 p.m., and guests were asked to dress in elegant beach attire. Bun B was the master of ceremonies, and the bride wore a Alice temperley dress for the special occasion.

The hip-hop star met Cooper at the London stage of the 2010 supercar rally and the British entrepreneur proposed on Christmas Day last year in Edinburgh, Scotland after three years of dating.

The couple both took part in the 2014 rally earlier this month and previously announced their plans to wed in Ibiza, Spain, where the race reached its conclusion on Wednesday. Now dance music star Aoki has revealed Eve has since become Mrs. Cooper.

Earlier today (Saturday, June 14, 2014), he shared a picture of himself with the pair on Twitter with the caption, “Congrats (congratulations) to the newlyweds @mrgumball3000 X @therealeve.”

In a statement issued earlier, the couple said;

“We are beyond happy to celebrate our marriage with all of our friends and family and start our journey in our new life together. It’s been such an amazing experience and we are happier than we ever thought we could be. Thanks for the well wishes.”

Days before their wedding, the bride and groom planned several activities for their guests. On Wednesday, family and friends gathered for a fun night out at Pacha club. The next day, they got the chance to catch a tan poolside while artists and DJs performed live for them at Destino.

On Friday, the couple hosted a champagne reception at their villa, and dined at LIO restaurant overlooking yachts and the Old Town.

In April, the “Let Me Blow Ya Mind” singer celebrated her bachelorette party at Up&Down in NYC’s Meatpacking District with a close group of girlfriends. “Thank u to all my girls for tonight,” she gushed at the time. “The best #bachelorette party #ever #girlsnightout #almostmrscooper #fun.” She added: “I FEEL SO SPECIAL.”