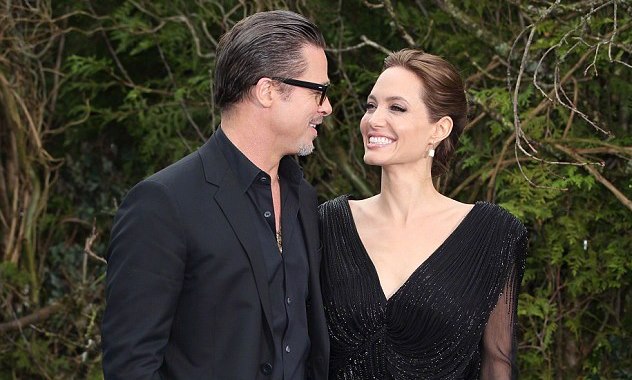 According to reports, Angelina walked down the aisle in a very traditional, comfortable but plain white floor -length dress made of antique lace and silk. Some reports claim the dress belonged to Angelina’s late mother – Marcheline Bertrand but this has not yet been confirmed.

And a source today told MailOnline how the couple decided to marry at the stunning estate they bought in 2011 after Angelina made a promise to wed in France to her mother – and also to commemorate the 10-year anniversary of the filming of Mr & Mrs Smith, where they met and fell in love.

Brad and Angelina’s wedding rings are believed to have been designed by their good friend Robert Procop, who designed Angelina’s stunning engagement ring, an estimated 16-carat, emerald-cut diamond and worth approximately $500,000. Brad’s new gold wedding band is reportedly worth $10,000, according to jeweller to the stars Vashi Dominguez, who said: ‘Although Brad and Angelina are global stars, it’s a surprisingly modest ring.’

While we all wait for pictures from the wedding (if Brangelina choose to share them), lets take you on a journey of Brad & Angelina’s nine-year relationship.