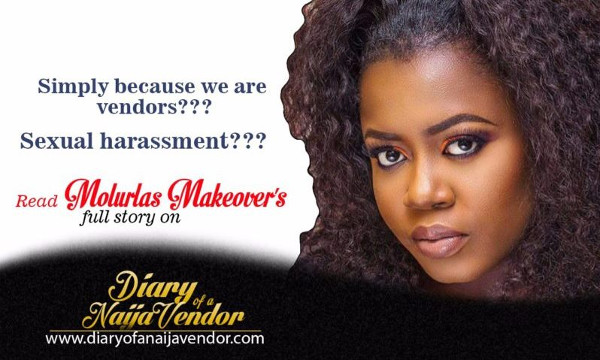 Today, we have Omolola Ajani-Shittu, the Lead Makeup Artist at Molurlah’s Makeover who shares her story of how she was sexually harassed and blamed by the bride’s mother for shouting too loud about it.

I once had a client in Abeokuta; a bride who promised to take care of my accommodation, just so it wasn’t included in her bill. The agreement was she would lodge in a hotel and a room in the same hotel would be reserved for me. On getting to Abeokuta, I was told the plan had changed; the bride’s dad refused to let her lodge in a hotel because their house was big enough to accommodate her and her friends. Truth be told, the house is huge and you’ll be forgiven if you mistake it for a palace. Judging from the looks, I felt the amenities be very close or even better than what you’ll find in most hotels.

When I arrived at the house, the bride gave me a room in the main building but her mum (she seemed like one of those “naughty women”) came and said she cannot let vendors stay in their house. She asked that I move to the staff quarters. I didn’t mind terribly because the staff quarters looked like one of those N10,000 per night hotel rooms in Lagos.

I settled in to rest as the event was not until the following day. I noticed the room had an occupier judging from the neatly arranged shoes and clothes but I didn’t give the thought much consideration and tried to fall asleep despite the noise and smoke coming from the caterers cooking in the compound.

I eventually fell into a deep sleep so much that I didn’t hear the occupier/owner of the room come in. It turned out the room belonged to the family’s driver! I guessed he just came in and saw a sexy woman in shorts and a spaghetti top sleeping on his bed. He must have assumed it was his lucky night as the next thing I saw was a naked man “grinding” against me. I was so shocked, I screamed, shouted and kicked him off. He didn’t struggle with me though but I already made noise, which attracted the caterers who ran in to intervene.

The caterers alerted the mother of the bride, who came out to see what had happened. When she did, she mildly scolded the driver saying “one day his love for women will get him in trouble”. She then turned to me and said “why did I have to make so much noise, you should have just calmly walked in to report it”. I lost my cool and asked if she would expect her daughter to do the same if she were in my shoes? Trust Yoruba mothers, she immediately turned the matter into a case of me being rude. She went on a rant saying “how can you talk to me that way, don’t you have home training, blah, blah, blah, etc.” The bride came out and started begging but I wasn’t going to have any of it.

The whole fracas started at about 4am and it didn’t end until almost 5am when I packed my things and headed for Kuto garage. I got on a bus straight to Lagos and didn’t stay for the wedding despite the fact that I had been paid in full.

I have since learnt to take care of my own logistics (moving, accommodation, etc.) and I never to trust it to clients any longer.

See you next Tuesday for another interesting feature ???

Get in touch with Molurlah’s Makeover

Dairy of a Naija Vendor, is an outlet for vendors to share experiences, tell stories, inspire, learn from and encourage one another. If you’re a wedding vendor and you have any real, fun, behind-the-scene stories to share, please send a Whatsapp message/voice note to 08083225395 and we’ll get in touch with you. Visit the website and follow Diary of a Naija Vendor on Instagram and Facebook.